Two cups of hot water, a dish of lemon slices, a hot chocolate, with cream and marshmallows, and a plate of toast and marmalade arrive at the table. Melissa waves her bony wrist at the boy, gold bangles jangling. Jennifer wiggles her fingers crammed with rings, and scoops up a marshmallow.

His eyes could appear as blank
black discs in a handsome patrician visage
when observed at the desk from
eventide street window but
only because there they gazed
inward, remembering, rejoicing
resurrecting realities borne of
fairy tales of wingéd truth

A gift of a day, unexpected,
found only in the incidental way of a passing remark;
a walk through almond terraces and tangled olive groves,
down, over warm rocks that smelled of salt and windblown pine
and rosemary.
We swam and the sun threw dots to dance around us.

Joy lives in small things,
sunshine colours on a water droplet
or reflections from a spider web.
It is in primroses, daffodils and bluebells
waking after winter’s sleep.
Joy is caring, sharing and little acts of kindness.
It is commitment, love and belonging.

I write because I want to tell myself things, and I don’t know what it is I have to tell until I’ve written it. Sometimes I surprise and please myself. But I’m scared what comes out will reveal an uninteresting, unsophisticated or unlikeable self. So, most often, I don’t write. 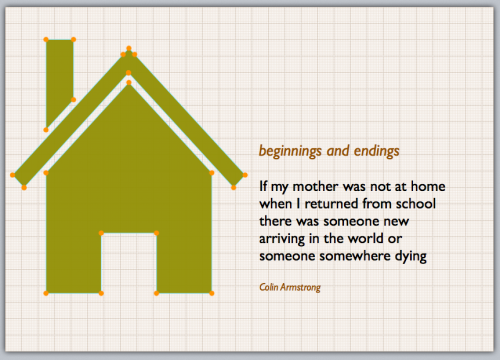 In the forties Ada was the woman in the street that neighbours came to with problems. For counsel and practical issues she was there for them. A knock on the door initiated everything from tea and dispensed wisdom to a gathering of soap and towels to lay out their dead.

We are what we write.
No hiding, no escape.
Must now shake off my lawyer past.
No more “subject to this” and “subject to that.”
Stop using three words where one will do.
No more hiding.
But without that cloak, I am exposed.
Like a peeled onion.

Once, I looked inside colours in front of me.
Made them breathe in paint on my canvas.

Moved by a language that began to grow in me,
my mind searched the need to create.

Words, picture all I see and feel.

I like polishing sentences like stones, paring away till the end result is less, but hopefully more.

I like to be creative with the furniture of a sentence.

I’d like to learn the business of plot and pace, momentum and push. I’d like to finish what I start.

Like all powerful medicine writing has side effects. I started in order to understand, join dots, make sense. Clarity would have sufficed but a different imperative has thrust itself upon me. I am unblinded and yet dumbfounded, rendered silent by an uncompromising beauty. The wordless knowledge of what is real.

Humanity, imagination’s flow, and variety connect members of Mungrisdale Writers. Each of these qualities can be enjoyed in this little miscellany of Trevor Coleman’s recently shared work.

A powerful character can be a modest person who can articulate their feelings and whose very presence brings joy and warmth to others’ lives. To be powerful person you don’t have to be the best at anything, simply a person able to cope with any situation in a way which pleases all.

Strengths and weaknesses in my writing

Where do I fit in as a writer?

I don’t feel I fit in. Having gatecrashed Mungrisdale Writers I now feel very welcome.

My strengths are few, a fertile imagination, an eagerness to put pen to paper, my search for humour.

My weaknesses are many, lack of belief, lack of English in my education, and possibly my search for humour.

What on earth can I write about “Lily”?

There’s Lily the Pink, the ones who are called Lily-Livered, the name of a flower, and I know it is a girl’s name, but I know not a girl named Lily.

I can I suppose write about an imaginary person named Lily, but I don’t trust my twisted imaginary powers, and my wife may not understand what I was doing in Lily’s bedroom.

I know I was only reading out my homework, but she may not believe me.

Perhaps I’ll write about a Lily Pond and play it safe.

i) A female executive entered the meeting room to attend the firm’s monthly sales meeting.

She was the only female, no one gifted her a glance as she tried in vain to mingle. After several circuits of the crowded room, she opted for a seat, feeling completely invisible.

The managing director arrived, announced and rewarded the salesperson of the month, before introducing, after only one month’s probation, the new female sales manager.

She was asked to step forward. No longer invisible, she was centre stage, with everyone anxious to make her acquaintance.

ii) Another day at the office. The usual feeling of being completely invisible – despite the feeling of importance her input made. Once again a very sound suggestion, made by her and ignored by male counterparts a few days earlier, was today heralded and acted upon, when put forward by one of the men.

At the end of a long day she made her way home dispirited, feeling completely invisible.

Opening the front door she heard a stampede of small feet, delighted squeals with small arms clamouring for a hug. Not only was she now very visible, but an imaginary spotlight had picked her out.

iii) Working in a male environment had taken its toll; she now felt completely invisible.

By the time of Donald Trump’s election, still not being seen or heard, she decided to join an anti-Trump rally and revolt against the chief female invisibility maker.

Expecting to be one of a few hundred, she was amazed to find millions had joined the march to voice their concern.

The TV coverage next day was staggering. It showed the mass procession so vast its trail could be seen from the moon.

If seen from the moon, she was no longer invisible.

At our meeting on the 6th April, tutor Angela Locke invited us to enjoy her copy of this framed painting. The work features Hans Christian Andersen and some of his stories can be identified ‘around the edges.’

Writers were asked to ‘keep in the mind’s eye’ an image from the painting and – there and then – allow a piece of writing to flow from that. Great pieces ensued and were shared aloud around the table.

Homework for presentation on the 11th May involves something similar. Jot down some stories ‘around the edges’ of your young life, and distil one or some of these into 100 words.

Colin Armstrong is one of Mungrisdale Writers’ best loved poets. Every inch an inspired Cumbrian countryman, lover of nature and expert on Lakeland dialect, Colin’s poems are deeply resonant and evocative. This off the cuff recording was made during a coffee break midway through our meeting earlier today, 6 April 2017.