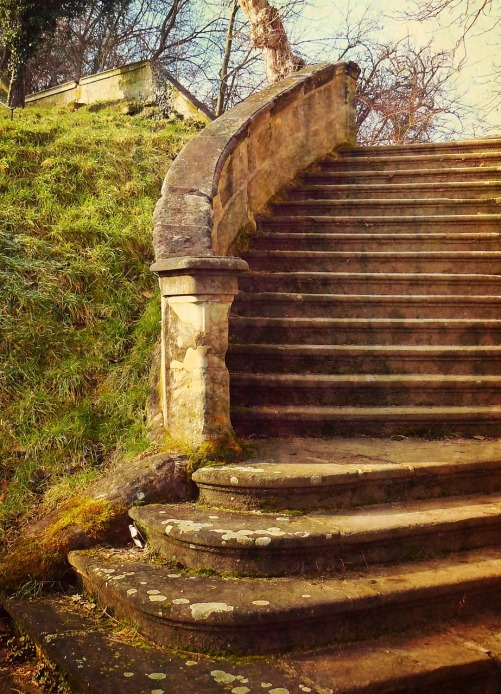 Solid stone steps lead down to fields and flower beds,
Before this ancient house, a green lawn spreads.
But turn your head, look back towards the door
An anguished couple stand, as sun drops lower.

And what of the lad who’s saying good-bye?
His gaze looking past Shepherds Crag,
Is he riding away with a sword at his side?
Or wearing a khaki cap?
Is he trying to smile, and promise his mum
That one day, very soon, he’ll be back.

Can he see how the bees make the petals expand?
Hear the fountain that plays in the pond?
Will he care if the trees are cut down when he’s gone?
Does he feel any sort of a bond?

The house must have known many similar scenes
It’s stood on this brink for so long.
But the strength of the love when your boy takes the place
Of failed politicians, in war,
Is something beyond what we know of as love,
It’s not better than love,
It’s just more.

There are places I can go, without trying,
They present themselves to me.
The perilous journey on a ship
With masts, and sails that curve into the wind,
As it navigates an iceberg sea.
Or the familiar white house I know so well
With lavish grounds, and swimming pools full of sunshine.
In one dream I was in a room,
Only to find myself in it, years later.
The sink was in a corner, and the windows
Opened with a pole. I turned and saw it,
It was there.
My soul recognises before my eyes have grown accustomed.
So that when I met you, I knew,
Before a word had passed between us.
The cynics mine for proof of truth,
Before they can accept it.
Cloud reality with clever words,
But remembered dreams are not of that order,
They are more real
The less
They are explored.

Genes, genomes, DNA in a lovely spiral,
And inside a soul stands proud,
Creates meaning as, like the prongs of a tuning fork,
I quiver into existence,
Excite the air around me at
My own frequency.
I try to bring you closer
To my wavelength, by scratching
Symbols on a page, a piece of bark, a cave wall,
I put a foot through the ice on the top of a puddle
Just to show you that I’m here.

Men survey. Women are surveyed. Or so they say. Not Wilma, the Unseen Woman though. She is outside now, listening to workmen rebuilding the storm damaged wall, discussing imaginary conquests and what could be paraphrased as their bra sizes, simultaneously rolling stones into groups defined by their largeness. She goes downriver, where fishermen are comparing their catches both pescatorial and pectorial. She reaches the harbour. Here the ships are in and the sailors strutting. The talk is of salt, seaweed, barnacles and spray. Brandy and wild wide waves. Depth, and swell.

Wilma steps out of invisibility and enters the ocean.

She melded in the Tatras.

The only girl, small, neat, bright and American, among a motley bunch of British students on UN vacation work experience.

Ostensibly road building, she lit up days off in the mountains and by the river.

We met, relaxed, in pre-Wall Berlin, about to ‘do good’, naive, self-important.

We returned, frightened, to find the Wall and armed guards.

Clinging to our passports, hers, being American, was most scrutinised.

We all had fallen for her.

She was called Ruth.

Where is my son? Handcuffed and swept,
Unwitnessed, from a street at dawn.
A hood over his head, the pressing gun
Butted against a mother left to mourn.
Jammed behind a passenger seat
Hearing only the engine’s growl,
And a passing siren that’s not for him.
An electric prod sparks, and naked
Howls leave sores exposed and weeping,
Whilst grief seeps through bones,
Turning my chestnut smooth to grey.
Everyday I visit this place
For I trust in you my Lord.
I listen to all the Government’s reasoning,
The lies fantastical – no one can quibble
Suffocate in fear and longing for truth.

The woman came to me for cutting.
My mother said NO.
I went back to school but nobody would speak to me.
Without cutting there will be no husband.
I didn’t understand.
We moved to a shack in the city.
My Mum cried. I cried.
At my new school the teacher took us to see a film.
A lady said that the cutting was bad for us.
Two of her children had died when they were cut.
The lady on the film was my Mum.
Her two children were my twin sisters Marti and Fatu.
Now I understand.

I dress ‘to kill’ in my feathers and skills.

Shimmering moonlight fills the bedroom. The stone walls glinting, reflecting movements of the river below.

I am cool and white like the moonlight, silky, smooth.

My naked body, cool in his hands.

Weightless, substance-less, I am about to float into space, a familiar journey. When he tries to stop me.

My body is performing skilfully but I cannot open my eyes. I am only partly there. I  have almost gone. Trapped in terror between the worlds of visible and invisible.

I always make my real self invisible …

The first time Tom saw Dylan, in 1965, there was already a buzz surrounding this young American songwriter. Queueing, Tom chatted nervously to the girl in front of him. Her A- levels, like his, were near. Once inside the City Hall she disappeared to the balcony.

Eventually Dylan was on stage and for about fifteen songs epitomised presence and lyrical virtuosity in equal measure. At the end of the best two hours of Tom’s young life he filed out for the last bus home, but under a streetlight, smiling, stood the girl from earlier. ‘I can hitch home’ he thought.

Around the table animated talk between mother, father and teenage children. Love, laughter and warmth radiate.

Colette knew they would be coming to claim another victim for Madame Guillotine.

Invisible in the background, never acknowledged, she was a shadow, a faithful, loyal wife. She prepared canvases, mixed paint, even painted whole areas of the portrait. He was the foremost painter of the day. The patronage of the nobility gone, he had fled to England.

The knocking on the door was insistent and she answered fearful for her life. Instantly she recognised the visitor. It was the leader of the mob who insisted she paint his portrait.

She divorced her husband.

Don’t look for me, I’m gone,
but look in the morning shadow across the landing,
the sag of the bed, the dregs in the cup,
the living, breathing void,
a space in the air where my heart still beats.
So eat from the fridge,
and drink from the tap,
walk on the cinder path with bare feet,
hold on to everything,
and I’ll be holding too.
And when your hand slips across the sheet
one cold early morning, seeking warmth
let me meet it,
and let me carry you across the threshold.