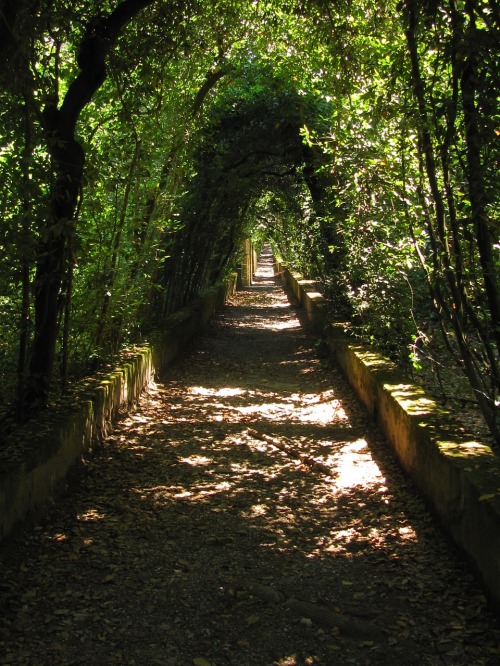 There is a garden behind a wall, where hollyhocks stand straight and tall
Lavender roams wild and free, ivy wraps round every tree
Maiden fern and meadow sweet weave a carpet at your feet
Flower heads embrace, entwine, Harlequin and Columbine
There is no bird song in the air, bees and butterflies take care
If you should ever stray near there, take the time to have a look
And see the babble in the brook
One thing you will never see, is my friend Mallory and me

A mandarin moon moves maleficently across the sun creating an eerie orange glow throughout the valley.

The wind sails in on a sea of white horses. Heads rearing, manes tossing, wildness of a bush fire reflected in their bulging eyes.

Trembling trees grow arms to hug and hold each other tight until the tempest passes.

In its wake a Whirling Dervish picks up its skirts, dances a fantastic fandango to the beat of the retreating horses’ hooves. During the dying throes of the dance the Dervish dips its head into its heart, diminishing in the dust.

The quietude of evening post rush hour throng
The lull before a storm, a hushed dirty sky
The silence in a church when the choir stops its song
The parched empty bed where the river has run dry
Some stillness salves the soul
Becalms a troubled mind
The singing of the bowl
Serenity and Sound combined

Chris had been really pleased when Jane telephoned and asked if she could stay with him for a week of the Easter vacation. She was doing her post graduate teaching qualification in Newcastle and they’d met six months earlier when he’d been doing his. Now he was in his probationary teaching year at Penrith’s Ullswater Boys’ School.

The early Spring sunshine through thin curtains woke Chris and he’d spent a couple of hours cleaning and tidying his rented cottage at Kitchenhill just outside Penrith. Later he met Jane’s train at Penrith station and she said she would like to see a lake. They’d driven down Ullswater, chatting easily, and carried on to Ambleside.

There they’d gone into a chintz and china tearoom owned by a striking woman of about fifty in a long dark skirt, bright green blouse, beringed fingers and dangly gold earrings. Chris noticed the earrings were sigil-like stars and crescent moons as she took their order. They also learned that her name was Mary and she’d previously owned the infamous ‘Jungle’ transport cafe on the A6 near Shap. She’d sold it three years earlier, just before the M6 had opened in 1970.

Mary had asked what they did and Jane told her. “You won’t ever teach” said Mary quietly to Jane. Jane’s brown eyes widened “Why do you say that?”

“I see things.” said Mary with a slight moue and an apologetic lift of her shoulders as she turned back to the kitchen.

Oh Gretna Green, exalted place, young love’s impetuous mistake,
Optimistic souls unite, above an anvil troth they plight,
Bagpipes loll with limbs outspread until their breath returns,
On motorway, the sun ascends, a far horizon burns,
The birds sing out, hope rises new, as glimmers of the day peep through,
Light crept above the concrete mall, wool shop, whisky shop and all.
Through golden sunrise jumped a ray,
That flash brought Jack to earth, on summer’s longest day.

Officials who logged on first thing, learned of a legal glitch,
All weddings made in Gretna had one important hitch,
Each certificate of marriage, each wedding was destroyed,
Was cancelled out, abolished, repealed and null and void.
Cumbria News cries out all day, to those that Gretna wed,
‘Technically, legally, you are not now, have never been,’ they said.

Ask yourself what you would do if put in this dilemma,
Would you marry them again, keep the same old fella?
Would husbands start again, propose, and go through the whole thing?
Would they have to book a room, a meal and buy a ring?
Gretna Green was sanctified by antiquated rules,
But now the Gretna bureaucrats were made to look like fools.

Women thought, ‘I see that I’ve been single all my life,
A mother yes, a cook, a maid, but not it seems, a wife.’
Husbands scratched their heads, they paused and listened to the news,
Weren’t married now, had never been, felt anxious and confused.
The news rolled like a clap of thunder,
‘All set free in one big blunder.’

Jack’s sabotage was done, he watched the summer haze,
He had to hitch a sunbeam ride, to grasp the dying rays,
And wait in space for his next chance, next June the 21st,
Might make another joke go far too far, might do his worst.
A good day’s work for Jack the yearly, Jack the naughty, Jack the nearly.
Some were glad and some were sad, but Jack was quite elated,
He melted back into the sun, became a flame, and waited.

Magical realism is a contradiction
The real world is wonder enough,
So why follow a path of myths?
As the sun rises,
The miracle of human birth,
Allows the understanding
Of  this Earth.
Real challenges to be confronted and enjoyed.
So why hide behind mystical words?
Reach out to those
Mountains to climb
Seas to sail
Skies to fly in
Countries to roam
Peoples to meet
Celebrate our time here
Before the sun sets for the last time
Who needs fiction?

It was only sunrise giving life to every corner of the small bedroom three that brought relief to brother Ron. The angry man who threatened to strangle him never came after day break.

After only a few nights sleeping in bedroom three, Brother Ron was allowed to sleep next door at Grandmother’s. Bedroom three remained ever vacant.

The previous tenants had been the Downes family. Mr Downes, suffering from an incurable disease, was forced to spend the last months of his life confined to Bedroom Three. His isolation caused terrible fits of jealousy, convinced his wife was having endless affairs, he tried many time to strangle her from his bed.

“That’s him – that’s him” – brother Ron cried during a chance meeting with Mrs Downes and her elder son Leslie. “That’s the man who wanted to strangle me”.

Leslie was indeed the spitting image of his dead father.

When we eventually moved house, we exchanged houses with a family of three daughters. The youngest was allocated bedroom three.

Shortly after they had moved in, Grandmother heard loud screams coming from bedroom three and reports of an attempted strangling were gossiped by neighbours.

It was mid October; the tail end of Hurricane Ophelia was ravaging Cumbria.

A mother and her two infant children peered out from the safety of their bedroom, witnessing the frightening effects of natures force. Leaves, branches, twigs swirled helplessly and garden furniture cruelly dumped from terrace to lawn.

“Our tree house won’t be blown away will it mommy?” the little one said.

In the light of daybreak, after Ophelia had blasted goodbye, the young mother surveyed the scene, anxiously viewing the tree house. It was very much intact, but its door had been blown wide open.

The outline of a burly man, silhouetted against the rear window could be seen clearly, whoever could it be. The figure was still there by the time she had dressed, she just had to go and investigate.

She climbed up to the tree house, fearful and tense, nervously calling several times after noticing that the door was now firmly closed.

Still calling, she slowly opened the door to what she thought was a rustling sound. The Tree House was empty, but for a large pile of leaves slumped on the very spot where the intruder had stood. The leaf man was obviously not for human eyes.

Searching for magic and its realism, I found myself in the tiny village of Cigam, a small backward village in the heart of Cumbria, distinctive for its small buildings with pointy roofs.

Entering a building sign posted ‘Info Centre’, I was directed by arrows to a lift marked ‘Magic Beware’, which opened itself and beckoned me in. The lift walls were adorned with pictures of Broomsticks, Wands and Witches Hats, it had a distinct smell of Cordite and cat pee.

The lift floor collapsed into a chute the moment I stepped inside. Down and down I went, landing eventually on a large soft cushion emblazoned with the words “Bum Saver.”

Only one door had the sign “MAGIC” and it was through this door I heard music and dancing to a song most familiar to me, a song passed down through generations of my family.

As I slowly opened the door, the song started once again from the beginning.

My mother bought some cheese, it made my father sneeze
The cat had a fit in the kitchen; the dog had the same disease
The chairs began to dance, the table did the same
And the beautiful picture of grandma fell out of its golden frame.

And – would you believe it? – both chairs and table danced frantically before me, only stopping at the sound of a thud when a picture fell from the wall.